Gross Municipal Product or "GMP" is basically Gross Domestic Product, but for cities.  I only don't mention it as much as the data is a bit difficult to come by and isn't commonly cited.  However, I remember a while ago looking up Detroit's GMP to see what I was sure to find a cratering drop.

It wasn't.  Matter of fact, it hasn't cratered, but held steady, even rising in the past couple of years. 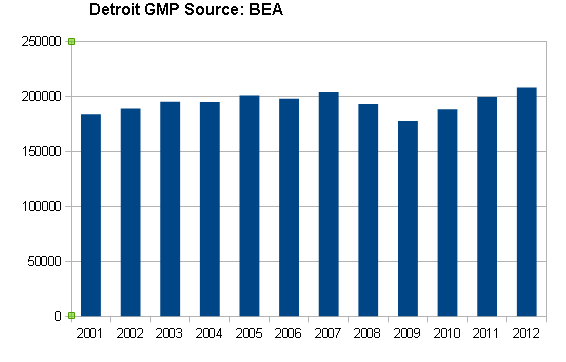 I couldn't believe it, but figured it must have been something with the metropolitan region. Maybe the surrounding suburbs were included.  Whatever it was I didn't really care too much about it until...

they decided to revamp how GDP was calculated.

This is a major concern I have with the economics industry. Since it is largely populated by academians and government economists, I don't trust them to be honest and employ the best methodologies when measuring the economy.  I do trust them, however, to lie and taint their methodologies to have a political bias to favor more socialism.  Regardless, this forces real, private sector economists to become tricky and use alternative measures that more accurately measure economic growth, wealth, etc. (for example, many economists will use electrical consumption instead of China's "official" GDP figures as they are prone to overstating GDP).  And I'm afraid we may now have to do the same in the US.

However, sometimes you don't have to go so far as to be looking up electrical consumption or some alternative measure.  Economists have made so many other statistical measures that invariably they will contradict each other giving government statistics their distinct fishy odor.  For example manufacturing employment. 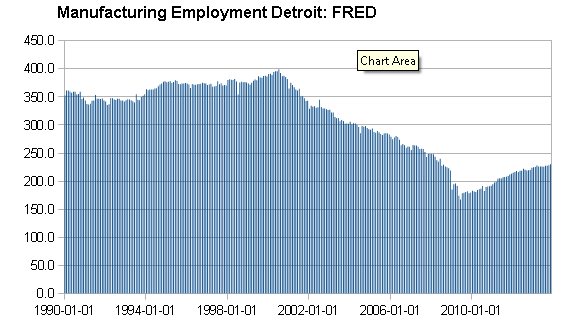 This is more in line with what I hear and see in other statistical circles.  Stagnation during booming times and a precipitous crash during the recession.  But the ultimate statistic that makes me question and no longer trust Detroit's GMP figures is the only thing that can cause economic growth - people.  Namely, Detroit's population: 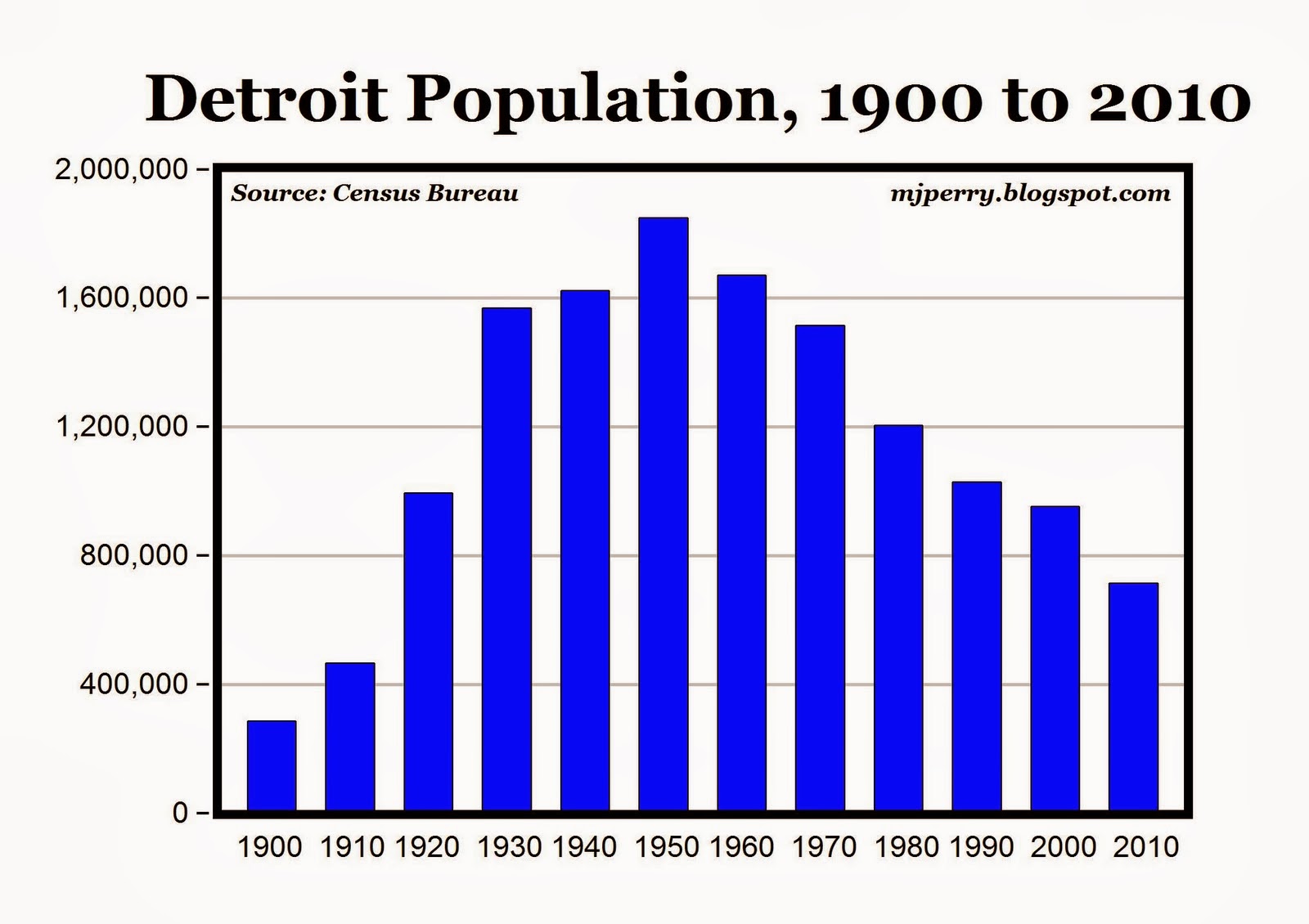 In the last decade alone it's population has shrunk by a fifth.  However, it's GMP has increased by about 7% during that same time period.  And even considering all the advances in technology and improvements in economic efficiency that has occurred in that time, I frankly don't believe Detroit's population is smart, educated, driven or capable enough to make those figures jibe.

Something stinks and it's the rosy picture the left keeps trying to paint of Detroit.

ht to MJ Perry for the chart.
Posted by Captain Capitalism at 1:29 PM

Speaking of Detroit's population loss, it wasn't the most productive people who moved out, thus exacerbating the falloff in true GMP.

I am skepticsl of all government stats these days. If the recession is over, howcome I, along with many other highly employable people, have no job, Maybe an odd contract here and there.

Government employees sail on cocooned in inflation-linked deals and pensions.

This is a much more important post than most people know. Even though a lot of people read Captain Capitalism, I hope it gets picked up by some site that has even more viewers.

It shows that the left is a bunch of liars, and not to trust any data unless you confirm it for yourself.

You can bet your bottom dollar, that things in this country are actually much worse than the Obama administration and the MSM would lead you to believe.

Detroit reminds me of the John Calhoun Mouse Utopia Experiment:

Utterly chilling. The mouse population died not because it didn't have enough food and water, but because the population had grown to a point where nature's social roles could no longer be maintained. Male rats couldn't defend territory and act like male rats anymore, so they became feral and aggressive. I wonder, if what we're doing in the human population isn't something similar. (Only it's not population growth and lack of space that's destroying our nature-made roles, it's inept social engineering and feminism.)

Watching a YT version of this experiiment and seeing the "beautiful mice"-the males that segregated themselves and engaged in solitary pursuits (while at the same time completely losing all interest in sex) reminded me of the "grasseaters" and hikikomori in Japan. How is that not the exact same thing except in human form? The truly terrifying thing is that once the massive dying started to happen and population went back to manageable levels, none of the rats were able to reproduce anymore. Their brains had been changed and they could no longer function normally. Is this humanity's future? Society breaks down because our natural social roles have been disrupted and no one knows how to act like men and women anymore?

I never liked GDP since it adds things together but does not do a good job in subtraction. For example when a hurricane comes ashore lots of damage occurs and so lots of spending and building happens so it looks like a boom in GDP but does not take into account all the damage.

It also does not take into account the quality of the spending, if we buy a bunch of over priced, badly designed and unneeded bridges or tanks or cell phones for poor people is this GDP increase really good for the economy?

Finally it does not do a very good at taking into account debt, both present debt, future debt that today’s spending will cause such as subsidies for high speed rail, or debt fueled future inflation

In defense of the US Government's statistics agencies of which I used to work for a few, never blame on conspiracy on what you can blame on under funding. You'd be surprised how much of the statistics is "fuck it - we're out of money to look further - this is what we have and it's better than nothing" and simply throwing up your hands because a bunch of welfare queens and baby boomers need to get their government cheese first instead of ensuring that the metrics of economy, the society, and the voting system(!) are mathematically and statistically sound.

How bad is the under funding? The BEA is in a miserable old office building in downtown DC. The Census is (mostly) located in Suitland, MD, the worst neighborhood in the DC area (as in Census employees and contractors are regularly robbed and assaulted by the neighborhood's "diverse" residents while going to and from work - it's common knowledge in DC IT/math/stat circles to say NO to working there). None of the agencies ever get even the most basic equipment and resources to do their jobs properly.

There is also just a lot of noise that you can't get rid of regardless of resources.

There is not a grand conspiracy by an elite few. It's just that many Americans (frankly, women who are unmarried and/or don't have sons and non asian minorities) don't want to pay (or more usually simply vote to force other more productive people to pay) for the things that it is actually essential for the government to do, one of which is to provide unbiased statistics on the state of the nation.

I checked out the BEA website for this. I'm not sure where this data comes from. For the Detroit MSA, with the BEA and Census data I'm getting around $45K GDP per capita for the years from 2010-2012 for the Detroit-Warren-Dearborn, MI MSA. Believe it or not, there is still quite a lot of productive industry around there, so this does not set off my BS detector.

Also, this is per capita - around 20K per capita is not 45K per capita and the movement could just be noise. 20K actually makes sense for Detroit proper. In addition, tt only went up and down about 12.5% from 2007 to now - given the massive economic contraction and the "diverse" population of Detroit's love for crooked mortage products, I would have considered this low.

The 20K per capita actually makes me think that it is Detroit proper. I'm guessing that this is a slight uptick from the bottom of the credit crisis + noise.

As well, a lot of liberal arts majors and successful and attractive african americans from there who hate math come to DC for useless jobs. So it may simply be them getting rid of dead weight. GDP per capita goes up if you get rid of people who make produce less than the average.

There are many people to fundamentally distrust in the federal government. The stats guys aren't generally among them. The simple fact is that the elected leaders simply don't care because the people who voted them in don't care.

Hopefully the statisticians aren't dumb enough to use the last choice, but there are still enough productive people in the Detroit Metro area whose jobs are within the city limits that the GMP might not look that bad.

Good lord, I meant to say it WAS the most productive people who moved out.