I am flattered when readers/viewers/listeners ask me if I've written anything else.  And the truth is yes, I have.

While most people focus on "the big three" (Worthless, Enjoy the Decline, and Bachelor Pad Economics) the majority of my readership is unaware of my first book "Behind the Housing Crash" as I've gained about 70% of my current day readership AFTER the book was released.

Not that you don't know what the outcome of the housing bubble has been (yes, it did crash, and yes, the economy did tank btw), but if you are looking for kind of a "Sam Spade" "film noir" themed book that focuses on financial analytical work instead of detective work, Behind the Housing Crash is it.

It basically is an expose that chronicles my trials and tribulations being a "credit analyst" in the banking industry during the buildup to the bubble.  The reason I mention I was a credit analyst is because that is where the rubber hit the road.  As an analyst it was my job to assess and judge the quality and credit of the potential borrower.  For the most part, the VAST majority of loans that came across my desk were absolute junk.  HOWEVER, management, bankers, mortgage brokers, and the entire housing and banking industries were completely dependent either through commission or sales on getting the loans approved.  Naturally this resulted in conflict where you had nothing short of the most corrupt and idiotic bosses ramming heads with the sane and virtuous underdog, and consequently a good story.

However, at the time I was an analyst, and even while writing the book, I did not have the hindsight or bird's eye view I do today of the banking industry.  I was still partially under the belief I was a "bad employee" and that my supervisors were "wiser, older" people.  But when I found out the FBI was investigating one of the clients of my most hated banker (you'll have to read the book for details), the wool was pulled from my eyes and I transformed into the modern day, hate-filled, "fuck authority" incarnation of Cappy you all love and cherish today.  Regardless, because I was at the bottom, it really does provide a "Peter Gunn" detective theme to the book. 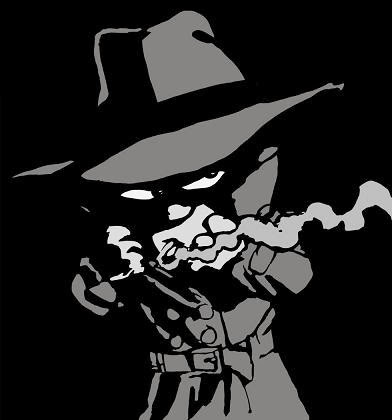 Read this shortly after "Enjoy The Decline". I was truly astonished to learn how much my trust in bankers, lenders, developers, and borrowers was utterly baseless. Your first hand report really opened my eyes as to the depth of corruption and hence, self-imposed destruction, the industry was based on. More importantly it prompted me to shake off societal imposed naivety and question everything that I thought was was a stout foundation. Ultimately I found the manosphere when I consulted your blog. One can only imagine how stupid and clueless I felt to believe what I was brought up to believe. No more. can't thank you enough for the jacking up. Painful at the time, but needed to retain some semblance of sanity.

"The dame's scream hit an octave usually reserved for calling dogs,.. but that just meant I had a case."

Calvin and Hobbes was great. BTW, have you ever read any stuff by Mickey Spillane? I could see you as a Mike Hammer fan.

The wife of my oldest friend worked for Countrywide during the housing bubble. He says that her and everyone in her office knew they were making lots of bad loans. How could the top executives of that company like Angelo Mozilo not have known too? My friend's wife knew the bubble was going to burst and moved over to another job right before it happened.

Don't blame the banks. The government created the situation where the banks were subsidized or forced to give loans to losers.

In the case of the government guaranteeing loans, it's just another case of it being rational to do an immoral thing. Just like food stamps, it may be immoral to receive them, but the government has made it a rational choice for people to do so. Can't blame the people.

That's pretty much what the state does, make it rational to be immoral.

My younger sister worked (still works) at Fannie Mae. She would tell her coworkers and bosses that housing was in a bubble and going to crash prior to 2008. They would say to her that Fannie Mae needed to buy sub-prime and other morgages or else they would loose out on market-share. She asked them why they would want a bigger piece of shit-pie. She told me that they all said she was crazy. She says that none of them have told her that she was right after all these years, but that they don't call her crazy anymore.