You Can't Say I Didn't Try

Let it be known I tried to save a young girl from going to law school.

Let it be known that like an older brother or tough fatherly figure, I tried to prevent what was likely a leftist liberal arts major from making a life crippling decision.

Let it be known that I am not an "asshole" for speaking the truth, but rather quite the opposite.

Though, let it be known when I tried to tell somebody the truth, I am consequently called an "asshole." 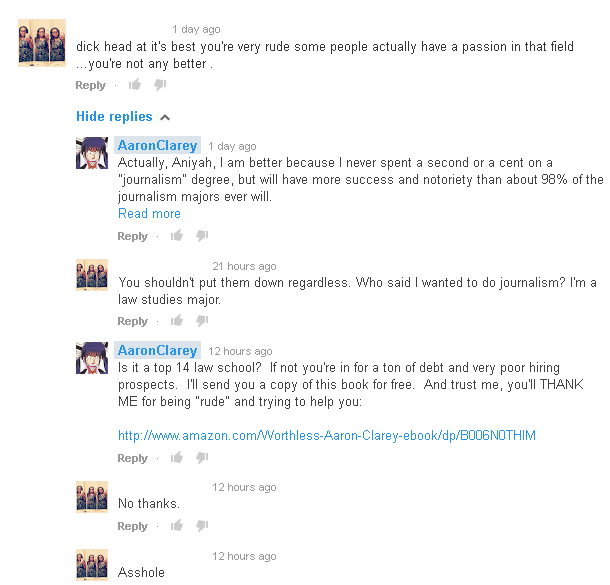 Not only do I want this to be up here for posterity's sake, but I now open the floor to predictions.  You may commence.
Posted by Captain Capitalism at 3:30 PM

Decides all that law stuff is too hard. Switches major to Wymmynz/Feminist/Gender Studies. Fails at life. Blames "the Patriarchy."

Well hey you tried! Offering the book to her for free was a nice touch.

Well, for what it's worth, you're one of the people who convinced me to become a diesel mechanic.

Well if you are branding yourself as an asshole to promote asshole consulting, you probably are going to get called that. Maybe she meant it as a complement.

I predict nobody will ever hear from her again because she won't do anything significant and probably would have managed to be insolvent in any case.

She spelled "it's" wrong. She meant "its." She'll never make it as a journalist or lawyer.

Someday her eyes will be opened.

I know a guy who went to the #21 best law school (GW in DC). He says the market is awful, and he graduated in the top of his class. Everyone he knows says it's awful.

I might tell that girl this if she would listen. She won't so who cares.

You are both wrong in this case, Captain.

She's Wrong: She needs to get a bachelor's degree before she can apply for law school. Pre-law like majors are useless if you don't actually end up going to law school. You can't become a para-legal because everywhere you apply for a job, they will see your four-year non-law school degree as evidence that you are a failure.

You are Wrong: As long as you graduate from a tier 1 or tier 2 law school, you will be able to find a job as a lawyer and you can work to distinguish yourself as a top litigator.

Big fan of your books.

I have 2 sons, one interned at a law office in Chicago before going to grad school in finance. He told me that the paralegals were all attorneys, and slowly going broke due to their loans and poor pay.

My other son is actually a staff writer for a law firm. He tells me the same thing. Many bottom tiered law school grads are only able to get jobs as paralegals.

Someone really needs to make some kind of a "Jack Chick" tract that one could hand to prospective college students warning them of the pitfalls of majoring in crap. (Perhaps a condensed version of "Worthless?" I doubt any kid I run into in public will be able to remember the name of the book if I tell it to him/her, but a condensed version might be more accessible and effective. And you could sell tracts by the boatload for people to give out.)

While they describe themselves as having a 'passion' in the field, the ugly truth is they want to be in it for the prospects of a glamourous live, status, and (increased) access to alpha c*ck. The same reason why med schools these days are overrun by females.

Brazillian guy who loves you (no homo) said...

wow cap, you really cared for that girl future, more than any of her go grlll family and friends

a FREE book!, what a lucky and ungrateful chick

keep up the good word man, i appreciate it very much

Who cares what happens to her? Maybe she'll be affirmative-actioned into a good job...ya never know these days. She is less to you than the mud on your boots and a lost cause.

I have some good advice for YOU, Cap. Ya see - I've been there and done that. And I am an asshole too for doing it. I had the unmitigated gall to tell my daughter that being a "gay hipster artist" was not a viable career option. The family went nuts! I wasn't 'supportive of my daughter', I was disrespectful of her life ambitions and a homophobe to boot! I was given the choice of shaping up or shipping out by the in-laws...and they were stunned when I shipped out.

It caused a LOT of resentment on both sides. Today my daughter is a retail till monkey who won't speak to me in anything other than four letter f-words. The in laws are furious because I had the unmitigated gall to predict the failure of my brother in law's marriage. (Both are public school teachers and she is a militant feminist). I laughed like hell when their marriage failed and said 'Toldjya so!' They hate me with the heat of a thousand suns now.

In the days ahead you will need a thick skin and a stellar sense of humour - because you are going to be a big asshole the same as I was. My advice to you is to keep on drinkin' stinkin' and telling it like it is - and find a good woman and settle in. It's going to be a helluva ride over the next few years and as you are proven correct time and again - you will become MORE hated, not less.

Being stupid and lazy is easy - and the people that are like that will not appreciate being told that such behaviour is not profitable or productive.

She will marry some rich lawyer, he'll pay off her debt,she'll have his kids and stay at home.

While Cap'n Cappy is a good generalist all-arounder, for the dedicated expert on the sheer idiocy of law schools it will be hard to beat http://thirdtierreality.blogspot.com/

or these folks: search for >> Inside the Law School Scam <<

As for Aaniyah, the sky is the limit, what with being the Preferred Citizen and whatnot. Community organizin, toll booth collection (about $300k/year), DMV diversity coordinator, etc. The chick has chops: inability to see the other side of argument, thinly veiled aggression, scatological vulgarity... long claws, gat carried sideways, the whole 9 yards.

You know she wanted to threaten you with a law suit for hurting her wittle bitty feelings.

It would always be fun to point out that calling someone an asshole doesn't mean they are wrong...

If you feel optimistic, recall that sometimes people actually let advice they didn't want to hear sink into their thick skulls after they've stormed away in a huff. Maybe this girl will do the same when it comes time to actually sign up for her classes?

she could go the affirmative action route, but even with the deficit spending of Obama, pensions are crippling most public sector finances. Whatever "non-profit" work she'll get, unless she's connected to rich/Washington, she will suffer the same fate as all other law grads.

Glenn Reynolds new book "The New SchooL" he mentions SEVERAL times in his book they're graduating TWICE the number of law grads as there are jobs.

It is officially an ego/hobby degree.

She appears to be black.

She's likely to get a free ride through law school, a cushy Affirmative Action post at a nice firm while misspelling "its" and driving her secretary to drink.

In addition, get used to seeing her picture. Likely to be enforcing gov't regulation in a town near you.

I mix and mingle with all types of attys, from the bottom feeders to the ronin, to the pluggers, I know their industry woes.

Half of them are KILLING it and making a decent living. The smart ones buy cash generating assets instead of Harleys. Some of them will retire properly.

The other half? The ones with full time employment still work two and three jobs. Lawyer in a box work for 20 dollars an hour. Soul sucking work. State attorneys working at abercrombies and Target in the evenings. Had one clean a rental for me a few months back. Paid him 100 because I felt sorry for him.

Just don't do it unless you have the connections and the proper school to succeed.

Jeez, my graduating class (MSc. in mathematical finance) are just killing it.

You know why we make this kind of cash? Because the stuff we do is hard, we cram two MSc degree's worth (math and finance) into a one year programme, and we pull serious working hours.

You can do this in most fields, if you're prepared to work your ass off. The very fact that someone might consider "Womyn's Studies" as a career choice tells you they've self-selected out of the gene pool... Zoology 101.

To be fair, if this lady is an expert on "assholes" she'll have lots of chances to study "ass-holiness" for 2-3 years in law school.

I went to an open house for a tier-4 law school a few years ago. Half of the prospective students were black. Someone told all the black kids with an "A" personality type (what does "A" stand for again?) that they could be Johnny Cochran or something.

In ten years when the sisterhood's girl at the Fed has seen to it that the greenback isnl no longer worth its weight in TP (because the men who do all the real work will no longer accept Fed-confetti), she, like most other empowered young women today, will be keeping body and soul together, barely, at a job even she can't screw up---in all likelihood involving cleaning toilets and mopping floors. She'll blame the Man for the fact she never amounted to anything, of course.

I just want to point out that there is one law school route that still works for jobs and income.

If your Bachelors is in a STEM field you qualify to write the patent exam as a lawyer. Less than 2% of lawyers qualify for this ( what does that tell you right there about lawyers?? ) and the demand for them is MUCH higher.

There may well be only 1 job for every 2 law school graduates, but only 1 in 50 law graduates even qualify for this area of work.

That girl was an A-hole and not able to take a piece of constructive criticism.

Good for you for trying to do a good deed, and shame on her for being unable to hold a genuine debate.

It is the way we handle ideas we do not like that shapes our character.

But why would you give that A-hole girl a free copy ? There a a lot of people who would actually benefit from your book, give them a free pdf version and they will appreciate it.

It's worse than that, She said Law Studies, It's not even pre-law, and may be worse than Journalism(if that's possible)
Univ. of Wisconsin Legal Studies Description.
http://www.ssc.wisc.edu/clsj/lsphome.html

Your mistake, Aaron, is that you gave your advice for free. You call yourself an a**hole, your firm is called "A**hole Consulting", she acknowledged your virtue and perspicacity by calling you "A**hole", and yet you made no money from her!