I've decided to start recording individuals, especially the youngin's of college age who, despite being in college and presumably really smart, advocate eliminating the freedom of speech.  Not because they are against the freedom of speech, but because they're so stupid and so ignorant and (above all else) so brainwashed they are incapable of understanding what the first amendment means.

Sandra Y.L. Korn is such a person.

Naturally she is a worthless studies major, majoring in women's studies.  Also she has never had a real job working at student newspapers he entire career.  Finally, she is not pretty.  She's not a dog either, but certainly a 4-5.  This is germane to the topic because of my theories about why ugly people tend to be liberal.  In short because being attractive takes effort (working out, eating right) AND takes selflessness (you care about how you look primarily for other people's benefit. 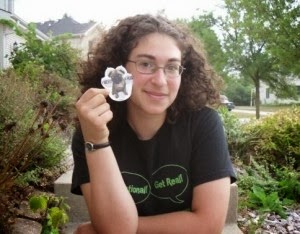 So three cheers for another waste of human life brought up by parents and an education system that failed to instill in her the basics about human rights, free speech and other vital concepts this country and our livelihood is based on.
Posted by Captain Capitalism at 6:40 AM

The progressives at slacktivist would rather discuss recipes rather than answer the question on whether they support Sandra's push to get rid of academic freedom.

While she's not repulsive, she is certainly in the "Sexy Horse" category.

+1 for the ugly = leftist observation. Ever seen an attractive militant feminist? Nope.

The scariest part of her fascist point of view is that she feels comfortable voicing it. . . It is also, perhaps, what may at last be our salvation. Leftists have always lied about their beliefs, their intentions, and their goals. They've always conned the American people. If they think it's okay to openly condemn free speech, maybe the people will finally wake up.

I think she's pretty. Not gorgeous. But definitely above average for this country. She looks natural, is of a healthy weight and has beautiful curly hair. I'd give her 6.

She says, “The power to enforce academic justice comes from students, faculty, and workers organizing together to make our universities look as we want them to do. Two years ago, when former summer school instructor Subramanian Swamy published hateful commentary about Muslims in India, the Harvard community organized to ensure that he would not return to teach on campus. I consider that sort of organizing both appropriate and commendable. Perhaps it should even be applied more broadly. Does Government Professor Harvey Mansfield have the legal right to publish a book in which he claims that “to resist rape a woman needs … a certain ladylike modesty?” Probably. Do I think he should do that? No, and I would happily organize with other feminists on campus to stop him from publishing further sexist commentary under the authority of a Harvard faculty position. “Academic freedom” might permit such an offensive view of rape to be published; academic justice would not.”

- What exactly did Mr. Swamy say that was "hateful" about Muslims? I believe he's an Indian politician so maybe he just mentioned the effects of Islamic Imperialism on India's history. Instead of banning him from returning to Harvard and teaching his normal course, why not invite him to an open campus debate where his ideas can be challenged?

As far as Harvey Mansfield, same thing. Let him publish his book and then challenge him to an open debate. His statement about rape is easily countered with statistics and other datum.

Its in the open market place of ideas where incorrect conclusions can be corrected and where correct ones can be honed.

We need a healthy culture of civilized debate.